Warning: count(): Parameter must be an array or an object that implements Countable in /home/customer/www/wineddown.org/public_html/wp-content/themes/DynamiX/lib/adm/metabox-options/init.php on line 890
 Wine’d Down 2: bringing home the new camper | Wine'd Down
Warning: Illegal string offset 'width' in /home/customer/www/wineddown.org/public_html/wp-content/themes/DynamiX/lib/inc/classes/blog-class.php on line 231 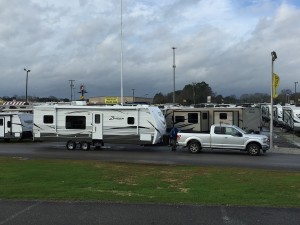 The story begins about a month prior actually, so lets dip back a bit for a quick catch-up. We planned a trip to Gatlinburg, TN with Roberta’s sister and husband. This is the trip that begins a new chapter in my life – Roberta agreed to marry me – yes, she really did say yes. BUT, that’s another story…

On the way there, her sister Les was running late because Doug was pretty sick. Roberta had the idea, hey, since we have some extra time, lets stop at Camping World in Chattanooga and check out the year end specials. (from my previous hint a month before this). So, what was to be a quick pop in and check out all the deals and look at some different models, turned into a 5 hour ordeal and a dozen campers and floor plans. We really liked one model, but it was a bit heavy for my truck. So, we found another one with the exact floor plan but an ultra-lite. We custom ordered the colors and extras and they said it would be in by Christmas. Well, that actually did happen, but with family in town and wanting to surprise everyone with a weekend trip, we decided it was best to get it after Christmas.

Roberta was already home in West Virginia so it made perfect sense to meet her there on her way back., We got a hotel and  spent the night to get a fresh start in the morning. We knew we had to sign the papers and do a “walk-thru” of the new rig and they also offered a driving class. The teacher, a 30+ year employee and camper extraordinaire was awesome. I can’t say enough about Ralph Miller… I learned more just listening to him in 30 minutes than I have done myself for 6 months. 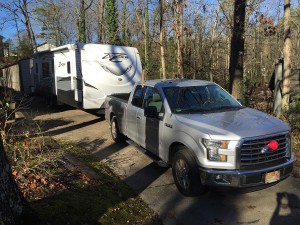 There was a big storm that passed through there 2 days prior and another one building up, so we were pressed for time and trying to get out quickly and get home before dark. Well, after all was said and done, we hooked up and began our journey home. It wasn’t the first time pulling a trailer, but one this size, yes, that was a first! During the driving class, I actually felt pretty good with it, but once we left the dealer and got on the road AND with a storm brewing, it didn’t get any better. No sooner did we get just out of Chattanooga, the wind and rain picked up. 30-40 mph wind gusts are not what I hoped for and being a newbie, more than I could handle. We found out later, the hitch wasn’t adjusted as it should have been, BUT still, winds that big are not the best of conditions. So, I managed to get about 20 miles down the road with Roberta following behind in her vehicle. And this point, she is a “pilot car” behind a man on his last nerve. About the scariest driving conditions and pulling a 30’ box to boot – not in my list of repeats.

She said can you make it – I said NOPE – not gonna happen. We pulled off the next exit, called a local campground but they couldn’t take us due to rising water, then found a motel and spent the night with out beautiful trailer parked in the back parking lot. The next morning was much calmer and after about 50 miles or so, I felt more at ease. We learned a few things since then and hope to tweak our setup a bit more and have it handling like it should. I know thousands of people drive these things, so it can’t be that hard!? (voice of Roberta Did he actually just say that???)

Anyway out with the negatives, we LOVE this thing! We really can’t wait to take an adventure as often as we can and see the parks, get to know others and see nature. It really just unplugging from the world and seeing what there really is to be seen…. and we can’t wait![/vc_column_text][vc_cta h2=”Camper Details:” shape=”round” style=”3d” color=”mulled-wine”]